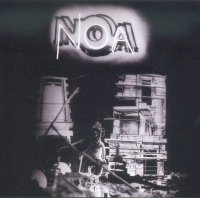 “Reissue of an obscure underground French album from 1980. NOA features a histrionic female vocalist, piping the French language and enunciating syllables just like another instrument. The music of Noa is of the jazzy Zeuhl variety, with plenty of sax (some shrieking), soaring flute and the expected rhythms of the genre.”

Although the general mood of the album is Zeuhl-influenced (the dark vibe & the female voice that reminds Eskaton), the main influences claimed by the band are Henry Cow & Art Zoyd. The fact is that the use of the female voice has something to do with HC’s Dagmar Krause era. Line-up includes guitar, bass, flute, sax, drums, percussions & female vocals.

This album, sadly the sole recording of the band, is a real curiosity, a pretty experimental record that could have only come out in France during this period, at the turn of the 70s.