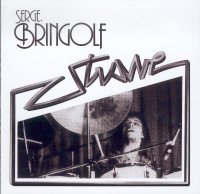 Reissue of Serge Bringolf’s first album (1980), Strave is an impressive effort. Classified as zeuhl, but including lots of jazz in it, it has a unique sound. Since Bringolf being a drummer, the drums are very important on this album. Add the incredible bass work of François Grillot, the impressive brass section consisting of Jean Golanet (trumpet), Philippe Gisselmann (saxophones) and Pascal Beck (trombone) & you have a good idea of what the music sounds like. You just need to throw in some great wordless (scat) vocals. The album consists of 4 long tracks, ranging from fifteen to approximately twenty minutes. A truly inspiring mixture of genres.

The first track of the album, ”Délire”, is probably my favourite as it shows the intensity that Bringolf’s band is able of. It is a perfect example of fusion between jazz and zeuhl.

“Strave” is good too. It is not the greatest piece of the album though but some powerful violin parts are quite impressive, giving an almost folk note to the composition. This piece also features a great drumming performance. “Utopie” is more of a ‘classic’ zeuhl piece. I love its intriguing, but lively mood. The vocals are particularly worth a special mention and the level of composition is once again great. It also features some of the greatest bass lines I have heard, and this is definitely Grillot’s best performance on this album.

The album ends with “Jodwerssen”, track that may be described as a synthesis of the previous tracks, mixing the best elements of each – notably the bass and trumpet remarkable performances, the drums’ jazzy feel, the virtuoso violin and the vocal works.