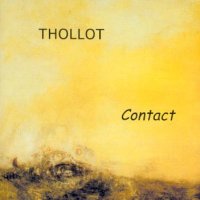 himself on guitar and piano.

A HIGHLY energetic recording, lead by a rhythm section on fire. THOLLOT’s guitar is on top, with a somewhat airy Frippian sound. The music is not so dark as on his first album being more direct, with a strong rock edge. Hot playing and VERY powerful Zeuhl grooves !

Francois is joined this time by One Shot’s rhythm section (these guys get around!) while Thollot plays both piano and guitar. This is certainly fitting of the zeuhl title, with fuzz bass that you can feel in your chest and persistently repeating electric piano motifs. In general, the piano establishes a background pattern while the guitar plays a clean-toned lead; sometimes slow-paced improv, sometimes clearly composed, but almost always in a Frippian lead mode (no rhythm guitar). As expected, the One Shots put in a great performance, as does Thollot, though the arrangements could use a bit of extra flavoring. This zeuhl is stripped down to its common denominator, bare and sometimes even gentle, though they sometimes get to the point where they sound like zeuhlers playing Canterbury. The compositions are most interesting when they release from the repeating modes and glide into space territory, but certainly the contrasting elements is what makes the disc ultimately succeed. Bare and sonically monotonous as it can be, Thollot still manages to pull off a good disc, and it’s an easy recommendation for hard-core zeuhl fanatics.

François Thollot is a French guitarist and pianist and on this album he is supported by bassist Philippe Bussonnet (Magma, One Shot) and drummer/keyboardist Daniel Jeand’heur (One Shot). One is tempted to stop the review right there, because I have said everything you need to know. The music is aIl instrumental, operating somewhere between fusion and the dark minimalism inspired by Magma. Thollot reminds me a great deal of Present’s Roger Trigaux in tone, and the compositions reinforce this description; repetitive, dark, foreboding. Odd meters, interlocking motifs, grooves, and aIl the other elements of these more famous bands are captured to perfection. There are ten cuts, aIl in the medium-Iength range, and everything is perfectly acceptable for what it is. However, and I feel like l’Il be the odd man out just like I was with Koenji Hyakkei, I don’t really see what this material offers that I haven’t heard before. A lot. I can’t very weIl write issue after issue about being bored by Genesis clones, and then get excited about this material. The group is tight, they make all the right moves, and this is a zeuhl album sure to find many fans. If I hadn’t heard it aIl before I’d probably be really impressed. If you want a Soleil Zeuhl release to knock your socks off, check out the new Eskaton reissue instead.