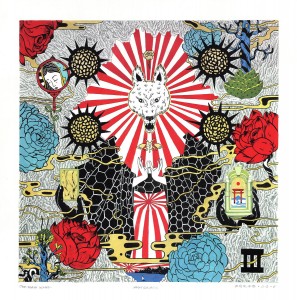 The album features only 2 very long tracks, each being divided in several sub-segments.

Track 1 (« Tsukutomi » parts 1 -3 for a total of nearly 20 minutes) is a long instrumental act, at the border of highly eruptive jazz-rock, prog & RIO.

A special mention to the impressive work of Andrea Calderon on violin, all over the album.

« Quetzalcoatl » was a highly explosive & fun album, often compared to Koenji Hyakkei’s wild exuberance, while « Amaterasu » is a more complex beast, the album of a mature band.

Let’s cross the fingers for the future…long live Corima !

Extracts can be heard here : http://corima.bandcamp.com/album/amaterasu