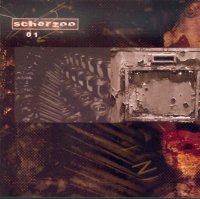 As for “01”, the album has a couple of tracks previously featured in Thollot’s 1st solo album (“Ceux d’en face” – 2002) but here re-written, re-arranged and in the end vastly improved.

The music of Scherzoo sums up the numerous influences of Thollot : RIO, Zeuhl, Canterbury etc..

This will be the last Scherzoo CD with this line-up as since the recording the guitar player has left and is now replaced by a violin player – bringing another sonic picture of the band. To be continued…